Aston Villa v Newcastle: The season to end on a high

We will win today. Not because Martin O'Neill does anything different or special, but because Newcastle are awful and deserve to be playing in division two.

It will also be interesting, to some extent, watching the relegation battle, but I'm predicting that the bottom three as of right now will be the three teams relegated. It isn't rocket science; they are the bottom three clubs for a reason.

But today isn't about Aston Villa and Newcastle, it's about the season coming to an end. What are we going to do tomorrow?

I am at a loss and last night I had a drink or two to try and drown my sorrows. The wife thinks I'm becoming a drunk but I argue it's okay to get a little drunk once or twice a month. She argues it isn't once or twice a month any more. However, she doesn't understand football and she will never understand what the season coming to an end means, so I say sharing a bottle of ouzo with a buddy is okay.

I've said above we will win and I really think we will but I'm actually having a bet on the draw and a draw for Hull. I did say earlier in the week that I fancy Hull to win but a draw will be enough for them and that is what I fancy they will get.

So, the match. There will be the usual here but there will also be some on the new Aston Villa forum. If you haven't registered, you should. I was going to transfer over everything from here but I didn't, mostly because it should be separate. 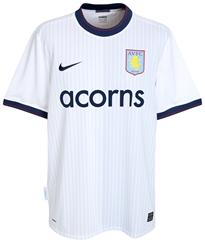 Anyway, I'm off for coffee and a bacon sandwich before I continue, but some news for you before I go. The new away shirt was released today and I honest to God, can not see why they banged the drum on this 'England' thing. I also won't be buying it, mostly becasue I think it's awful.

It has one thing on one side and one thing on the other; it just doesn't work for me. These half half shirts have never worked and I'm surprised we are trying to change that trend. If you haven't seen it, click the image.

Nothing here yet but it is coming, but check Twitter and the forum.

Okay, got it. I've seen why the reference to England. It's the blue collar and thing around the sleeves. Is that our blue? No it isn't. I reckon Nike had a few shirts left over from a bad experiment and we got lumbered with it. For those that don't know; we don't have a proper relationship with Nike. We have the same relationship that Fulham have with them, nothing like what United or Arsenal have. We are paying for our second tier relationship with this shirt.

This shirt is horrible and I still don't like the cartoon badge.

However, this new shirt does provide us with a few new wallpapers, so you can download them here.

Well, 4-4-2 and Craig Gardner at right back. Anyone care to predict anything other than a draw? We really should bear Newcastle but 4-4-2 is so old and poor, but I´m still betting on a draw.