Wilfred Bouma out for the season and some rumours

Wilfred Bouma needs further surgery to fix a problem he has with his ankle and the chances of him playing for us this season are about as high as me getting my space trip with Roskosmos.

It isn't nice news but you can only hope that when he does come back he is stronger than before and raring to go. The surgery is because of some 'floating particles in the ankle' and while it's not that serious, it does mean more recuperation.

Onto the rumours though, which is the part I like best. We're apparently after Leeds United midfielder Fabian Delph, to replace Barry when if he leaves for Liverpool in the summer. Now, I'm a big fan of giving kids a chance, but he's only 19 years old, is he going to be mature enough to play in midfield for us?

Another player we are linked with today and I really do use that word 'linked' very very loosely, is Sebastien Bassong. He is currently at Newcastle and is a left footed centre back who might even be interested in making the step up to a proper club to play at left back, your guess is as good as mine. 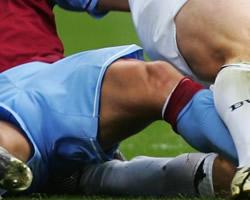 Lastly onto Samir Carruthers who I gotta be honest with you, I've never heard of, but that could be because he is nine years old, sorry 16 years old. He, from what I'm led to believe, had trials recently with us and he may sign up. He had trials apparently, but is also part of the Arsenal youth system. I'm not sure how this works, but I'd suspect if he had trials with us, Arsenal let him go, but I'm not sure. It is another name though.

Actually, one more for you; Panathinaikos want John Carew to spearhead their return to the pinnacle of Greek football. There, that is it and well, I'll let you debate the likelihood of any of these but I think I will be making my way to the fridge, for a beer. I don't know how it happened, but I've got the taste.