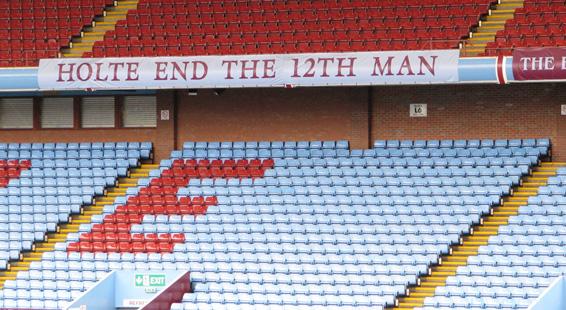 And so it has come to this. With eight games left of the season, we are sitting teetering on the edge. Amidst a tumultuous season of upheaval, we are faced now with the stark reality of dereliction of duty by our players.

Aston Villa have a group of players who should, given their undoubted capability, be further up the table than they are at present. However, “should” is a word of zero value to a game that relies on points rather than potential, on shots rather than “should have”s, and on fight rather than fear.

The “team” concept seems as fragmented as an army routed and fleeing back from whence they came. In fighting is in abundance - partly due to the players who have decided they are bigger than the manager, and partly because of the manager who thought it wise to try to build Rome in a day.

However, now is not the time for pointing the finger, now is the time for the people with the most passion - the fans of this proud club - to step in and fill in the void that has gaped in our team for far too long.

Right now, there is a need to sound the horns and prepare for the final stand. What was once deemed unthinkable, impossible, and improbable, is now sharply coming into view. In the midst of this unthinkable possibility, we need to stand firm, and make our contribution to the battle. We are the twelfth man, and we are more important now than ever.

Our contribution could well be the difference between success and failure - for we are standing on the edge of the abyss, and it is a knife edge that we precariously perch on for now.

Our objective is to stir and rally those morale sapped men who wear our shirt. If we are quick to question why our fellow men are weary and disorganised, are we right to turn our anger on each other and destroy ourselves? Only the most foolhardy desires to claim the hollowest of victories - that they were right all along that we would be defeated, for defeat holds no glory, merely despair and anguish.

So come now - stand up and be counted. In the midst of this battle, we need to rebuild Fortress Villa Park. To do so, stand. Stand and sing your hearts out like your lives depended on it. Stand up and sing like our away support does every time we go on the road. For the very life of our club as a Premier League team is under threat, and we must be the bastion of hope behind this great and proud club of ours.

Our next stand comes soon - be ready for battle. For to desert of duty now will only empower our enemies. The infighting stops now - whether you support the personnel or not, support the team, or we are in danger of plunging ourselves into the abyss.