Theres a lot to be said for forward momentum.

Over the last two seasons Aston Villa have been falling backwards at an alarming rate. Our Chairman is guilty of a lack of footballing nous along with his executives, albeit being innocent of an absense of ambition.

Randy Lerner went to the extreme with Martin O’Neill, allowing large bills to be plucked from his generous wallet, by a man with with a penchant for signing mediocre players, players without the tecnique to fullfill his ambitions. This policy brought us to within touching distance of the holy grail that is Champions League football, but left us just short, lamenting just a little lack of quality that could have tipped the balance in our favour.

Since then Lerner has become the penetant man, first with Gerard Houllier – once a fine wine but unfortunately exposed to the wrong conditions, and second Alex Mcleish, the ultimate purgatory for a club that has sinned in its financial practices.

In the context of fine wine, Paul Lambert is similar to an Italian Brunello Di Montalcino. A wine that is best opened after 8 years on the rack.

We could see Lambert begin to take on some aroma after taking a fourth tier team in Wycome Wanderers to the League Cup Semi Final against Chelsea in 2006/07, and securing a draw in the first leg.

A 7-1 win over Norwich with Colchester United to kick off the 2009 season demonstrated some flavour, with seasoned investor Delia Smith bringing Lambert to a Norwich side flirting with obscurity. Back to back promotions created body to the developing vintage and Lambert showed his every increasing value with a strong 12th position in his clubs first year back in the Premier League.

Now in 2012/13 Paul Lambert is with Aston Villa and within one year will be ready to open, allowing Randy Lerner to sit back and relax, once again allowing those large bills to be spent in the knowledge now that his manager will purchase players that have both the ability and the ambition to match their value.

Make no mistake, Lerner is decanting his wine right now, and showed he is preparing a final push in this industry with twenty million pounds worth of investment over the summer. Aston Villa fans are for the first time three years starting to smell some success again.

In a variety of ways Paul Lambert is dragging us forward with all his might, as opposed to pushing for all he is worth to keep a steaming locamotive from reversing quickly onto the horizon.

The Times They Are A-Changin'

Possession statistics are pleasant reading for Aston Villa fans this season, perhaps for the first time that most of us can remember. This posession is down to a number of changes affected by our new manager.

Under Mcleish we could see 20 minute periods of football where the whole team worked together and was on the same page, but more often then not there was no collective spirit in the side. While players diligently spoke out in defence of their manager, the experienced viewer could see not everyone was on the Alex Mcleish page of footballing tactics.

What Lambert has done is garnered the collective belief of his players to a style that allows you to play passing football. For you cannot pass the ball if you cannot win the ball, and now that the players hunt in packs – all equally determined to win the ball back – we are getting the ball back enough in order to keep it for long periods. Couple this new feisty mentality with a ball playing center half in Vlaar and a cultured midfielder in El Ahmadi, and Aston Villa now have a solid foundation to win matches.

After a year of frustrating post match interviews Alex McCleish must have felt like man taking a long walk off a short plank each time he had to step in front of the press. Lambert however is enjoyable to listen to, you can understand what he is trying to do at the club, you can understand where we are going and what is to be our footballing philosophy.

This kind of empathy with the cause and ideas gives fans a bright optimism like a glistening field of flowers at dawn. Once again we can feel those butterflies before a game, instead of the dread and resignation of the previous few campaigns. The weekend cannot come quick enough these days. 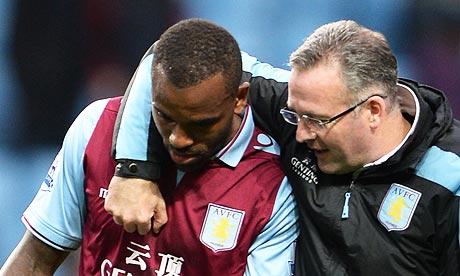 The role of a striker

The most annoying thing in the world for a striker is being dropped. Especially after you scored the week before. However unless the striker is a man of poor character this can often have a huge galvanising effect on the player, once again starting that fire inside to prove he is the best.

Darren Bent did a little whinging in the press yesterday, and we will allow him that, because after all he is one of the best finishers in the Premier League. Bent demonstrated in his goal celebration a different type of passion, one of overcoming adversity as opposed to overcoming lethargy. You could see a spark again, and this strategic move from Paul Lambert may yet be his best so far. A hungry Darren Bent fighting for his place in the side, could be the little bit of jet fuel Aston Villa need to finish above mid table this season.

This weekend it will Benteke’s turn to sit on the sideline and think about what he has to do to stay in the new look Aston Villa side.

Remarkably this is Aston Villas worst start to a premier league season. Yet, we do have a forward momentum going due to the horrendous run of results in the second half of last season. We have picked up a win, and we have looked like picking up more. We have lost a couple badly but we don’t mind because we understand Paul Lambert, we understand the process we are in, and we like that.

Next season Paul Lambert will be ready to drink. We the fans hope to be drinking Heineken, official sponsor of the Champions League.