I was sitting watching some more West Wing on TV last night, now on season six, so not that long to go and I had a fantastic idea for a post, but as some of you may know when the wife allows me time to sit in front of the TV, it's going to take more than an idea to get me off it.

So I emailed myself instead from my phone, so I'd not forget and well, you know what somewhere between my sofa and my desk upstairs and probably the few servers in between, it got lost, so while you were going to get one of my best blogs ever this morning, you're now getting this instead.

I will say this, if you haven't already seen it; Doc Bowles is back and his first post will be considered slightly controversial by some, but he's not wrong and it's view held by quite a few for some time and after reading an article in the Telegraph this morning by our friend Sandy Macaskill, it seems to be a growing consensus.

The post is basically about Barry as captain and it raises a point that will no doubt get a few people talking. You know my views on Barry, although I've got to say he has played much better when we've had a five man midfield for me, but he isn't captain material. 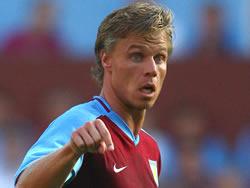 Moving on, which is quite appropriate as I'm wanting to tell you about Marlon Harewood, who has finally joined Wolves on load until the end of the season. If you haven't read between the lines, this is Marlon Harewood joining Wolves and never doming back.

Billy Davies told us this was going to happen last week and I've given my opinion on Harewood so I'm not going to repeat myself this morning although I will say thank you to the player. His commitment to Aston Villa can not be questioned and he had real heart and desire.

In reserve team news, I know not something I usually delve into despite me knowing I should and I feel bad about it, Wilfred Bouma played again last night - it is all good news.

When he does finally make the step up to the first team it will be hailed as a new signing and well, I suppose you could say he was because it hasn't worked for Nick Shorey. Bouma also set up the winner for the reserves, so he'll be feeling good this morning too, as we should be as it's possible he could make a return against Manchester United.

Lastly, I think for now and quite possibly today, we've got two players in the England squad, didn't we have five last time? They are Gareth Barry and believe it or not Emile Heskey. I'm now convinced there is a secret club or handshake because I fail to understand how Heskey got picked.

Heskey must have some dirt on someone at the FA because if he can get picked for England, I should be able to on current form, but maybe there is still more to come from Heskey, you'd hope so, because it would be nice to see some goals from him in the eight remaining games, as barring injury he will play every one of them.

Right, that is about it I think, that great idea from last night hasn't come back to me but if it does, it'll get posted, don't you worry.