Manchester City finished, just had to double check this, 10th in the Premier League last season and from my basic football maths, that doesn't actually qualify Manchester City for Champions League football, which from what I understand, was what he wanted to go play.

Now, it's not for me to say anything here, but I suspect if Barry has indicated his willingness to talk to Manchester City, he has as good as slapped every Aston Villa fan in the face, because well, he's sort of gone back on what he told us. 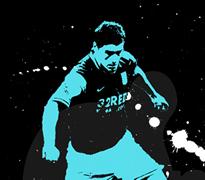 Remember those immortal words from Barry? "I’m desperate to play Champions League football and that’s why I have to leave Villa". Tosser.

I for one still think we can be stronger without Barry, but that is just opinion and we are all entitled to one.

But, if he is in talks, it surely is all about money and well, if that is what Gareth Barry is all about, then good for him.

More on this as and when we hear about it but I've got a feeling this is going to be quite a heated page at some stage today and for those interested, there will be a new Gareth Barry wallpaper here soon.