Gabby in the shirt, with a new sponsor and done deal for Young?

Would it be XBOX, or maybe Sony. Could Cadbury be tempted to become our new principal commercial partner? Those three would be big and maybe a surprise, so I was setting the bar a little lower and I was thinking RIM, HTC or maybe a bank or sportswear manufacturer.

But we didn't get any of those to become our new principal partner. We ended up with Genting, that multi-national giant of a gambling organisation and guess what, it will be the biggest ever commercial deal the club have done, much like it was last time out when we did a deal with FX Pro - who actually ended up picking Fulham over us.

I shouldn't joke, I'm sure it is very hard to find a company willing to invest money into a club that is watched by millions each week all over the planet with aspirations of regular European football. Okay, actually I know it isn't easy, I've actually done it, well sort of.

I've not done it for a Football Club playing in the most watched League in the world but I've looked for sponsors before and it isn't just about picking up the phone, so I'm not going to joke any more about it. Although I have to say we were lucky last year to get FX Pro - just as they were doing a deal with Fulham.

So, Genting (is that how you spell it?) it is and well, I guess it will be interesting, but I do hope that shirts for children don't come with the sponsor logo on - children promoting gambling isn't good.

Talking of shirts, here it the away one for next season. I quite like that. 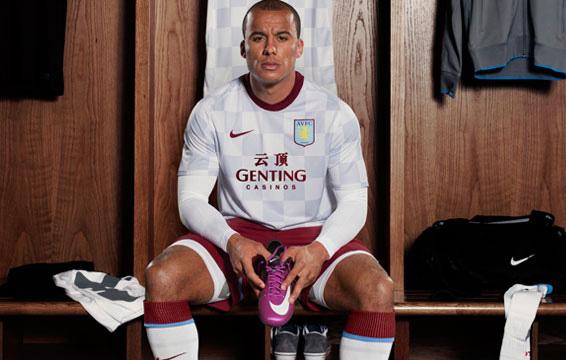 Sort of news, even if I've drawn a line

Right, this is speculation, but it is of the sort that needs a mention. Ashley Young, if reports are to be believed and I believe them, has passed his medical at Old Trafford and will be signing soon.

There is also a rumour that Stewart Downing was seen in a pub with Liverpool striker Andy Carroll and although a photo or two was taken, the club have reported that the photo is actually a fake.

I think it could be a fake, but it is a good one and I fully expect, seeing as we were told it was a fake, that Downing will be an Aston Villa player next season.