Martin Laursen has a press conference today and will likely announce his retirement from the game after the knee injuries, that have pretty much plagued his career, finally caught up with him, according to Danish paper Ekstra Bladet. 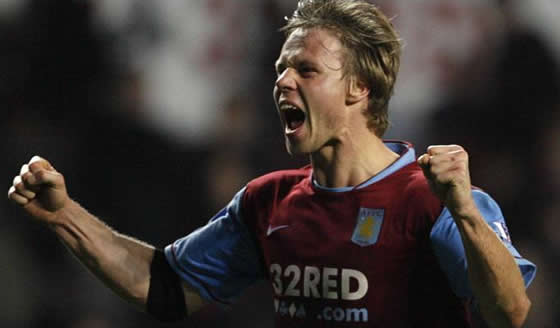 Laursen signed for Aston Villa on 21st May 2004 from Italian giants AC Milan for around £3mn. and while some might look back and say he arrived with an injury, people will also look back and say there were not many better £3mn. players signed in recent times and that he was a truly great defender.

Laursen, despite his 31 years, has had a fairly short career and the highlight of it, or the team where he has played the most games is Aston Villa and we've been lucky enough to see some cracking performances and reason to believe that with Laursen in the team anything was possible.

Unfortunately it wasn't meant to last, but it wasn't for lack of heart or determination.

Today, we bid farewell to Martin Laursen and while he only played 84 times for us he will be talked about for years to come and he will be fondly remembered for his spirit and determination and I have a feeling, he'll also remember us, for pretty much the same reasons.

See you in the pub Martin.

Click here for some Martin Laursen wallpapers for you computer. This site is new, but we are going to keep adding to it and Martin Laursen is the first player to be put up.
back to top