Let me start by saying that it's not impossible that we stay up this season. But let me also write and be quite clear that it's going to need something miraculous for that to happen. And that is why it's difficult for so many to see it happening. But it's more than a little unfair to continuously blame players for our current plight.

And I mention this because I see player abuse every week on this site and almost every day on Twitter and Facebook. Ayew used to get get dogs abuse until he scored a goal. And I have no doubt it will come back for him one day. And when we don't actually have a player to blame, when the entire team has put in a shift and done okay, supporters default to Hutton, Sanchez and Guzan.

I saw someone Tweet about how bad Hutton was once when he hadn't even played. I*m going to start unfollowing people that give that kind of abuse.

And it isn't the players fault and for the most part it isn't the mangers fault either although we've not had a manager at Aston Villa since 2011 that I thought worthy of the post. And under Garde, it's actually easy to argue that we're getting better and had he been appointed at the end of last season, I'm fairly confident we'd not be in the position we're in now.

But it does appear on the face of things anyway, to be too late now and it does appear that supporters know more about the club and football in general than the CEO and that is ultimately why we're in trouble. And this isn't me give the CEO abuse, this is me pointing out the obvious. A little like me saying I think Micah Richards would be better at right back than centre back.

We needed to win yesterday and we didn't and we put our most attacking player on the pitch for 7 minutes and we were forced to put on another attacking player. It felt a little like we were playing not to lose. But I do think it might have only felt like that.

I want to stress the word forced in that previous paragraph because we started our Sinclair, Traoré, Gil and Grealish on the bench and started with Westwood, Gana, Sanchez and Veretout. Now, I'm not saying the manager was wrong, what I'm saying is when we're desperate for three points, you don't leave it to the 83rd minute to bring on the player that has shown most attacking flair this season.

But I've got to stress that yesterday we were unlucky. We had the majority of the ball and we also had twice as many shots on target. But at the same time we were lucky not to have a penalty awarded against us. But sometimes, we need that luck and we got it yesterday. And a few weeks ago we didn't have that. It's an element of what is needed. Sometimes miracles are masked as luck.

The where we are what we need chart 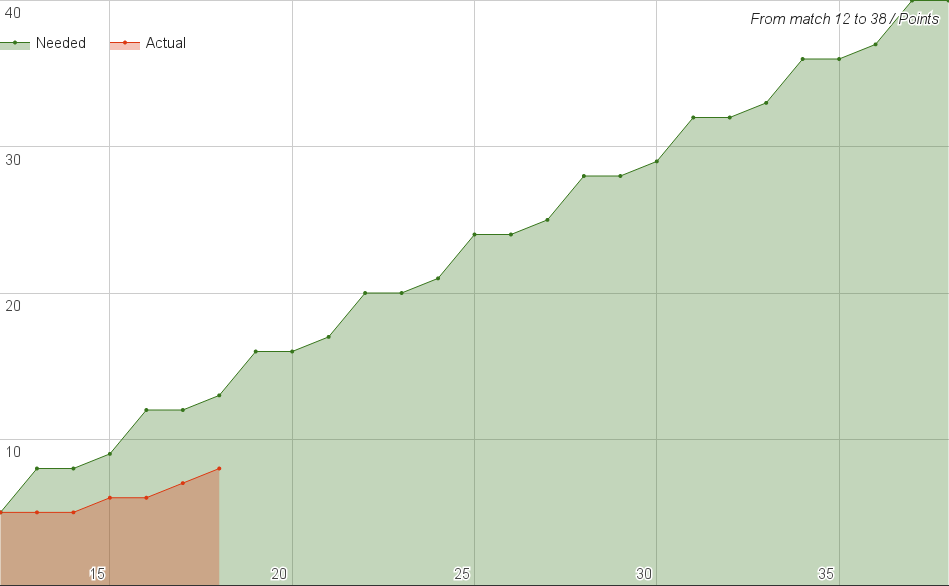 An improvement was made

If you looked at the table before kick off yesterday, you'll see that things have got better. At the start of the day we were ten points from safety and by the end of the day we were nine points from safety. And if you look the chart, that I'm starting to fall in love with, you'll see that if we were to win our next three, we're back on target for safety.

But that is having to win the next three. If we do that, we're back on target for staying up. Target for staying up is based on winning one, drawing one and losing one out of every three matches from when Garde took over. We're really not that far off. But when looking to the future, it's often easier to look at the past to see what is going to happen and our current form is shocking, so I understand why it's hard to see us staying up.

But the numbers are simple and easy to communicate. We have eight points with 60 remaining and a transfer window opening in a few days. It's not impossible and I still believe miracles can happen. And I know I'm in the minority, but that it has to come to this is the problem.

In other news, there is intense speculation that Under Armour are the new kit manufacturer for Aston Villa. I'm sure if true it will be spun as great business. I'd rather know why we can't keep hold of a manufacturer, but that's just me. I like to ask the stupid questions.