If the worst happens Aston Villa supporters, fans and customers must stand as one and humiliated by Liverpool

Had we won yesterday we would be five points from safety and while still a huge task, with twelve games to go, some would have been thinking it was possible. Instead, we didn't win and even worse, we played like we didn't care. We played with no desire and we played like a relegated side.

Still, we're only eight points from safety and there are twelve games to go. But I have to write that this season has been the worst in living memory for me and while it does look bleak, I've got to hold on to something, even though I'm braced.

But something happened to me yesterday and to put this into context, you have to think about Gary Neville managing Valencia. He's managing Valencia because he used to play football and he could string a few sentences together. Gary Neville is that bloke down the pub that talks a good game. Much like a lot of us. The difference is and this is the only difference, we're not in the network.

Rémi Garde was appointed Aston Villa manager because he was a decent pundit too - not because of anything he has done in the game but because he was part of the game. And that's why, after enough games, we're not really seeing anything different and why we all like Rémi Garde. And again, why if we do go down, he has to go and why he was wrong in the first place. But we all like him.

But the truth is, just like Neville, Garde is someone the club can control and they showed that in January. But if stories are to be believed, we could have had Moyes, but Moyes wasn't going to be a puppet for the club and that didn't sit well with the likes of Tom Fox, who doesn't want to be told what football is about - he wants to figure it out himself. I'm writing relegation party in my calendar but I'm just not sure if it will happen in March or not.

But to sum up yesterday - it was a shambles of the highest order. Liverpool started the day 18th in the current form table and were there for the taking. But we simply didn't show up. We basically let them have a go at us and it was almost as if we enjoyed it because we kept letting them have a go. The manager said it best when he said he felt humiliated. That's why I like Garde - but also why he isn't the right man and never was.

But it's also a sign of why we are in serious trouble - he wasn't the man before he was appointed, yet he still got the job. Next season we'll probably replace him with someone with Championship experience and hope he gets us out of it and he wont. I fear for Aston Villa and that's why it the worst happens, we need a plan.

If the worst happens

What comes next is a slightly modified few paragraphs from my post here because if the worst happens, we have to do something.

They have to send a message and that message isn't as customers packing a stadium and handing over the cash, it's as supporters and not by not handing over the cash. The important part though, is that for the very next match at Villa Park and even though the club is relegated, Villa Park has to be full to the rafters and full of voice.

Supporters must act as one and show any potential new owner the strength of the Aston Villa supporters. There are a few weeks to prepare for this and it probably wont happen, but there is never going to be a better opportunity.

The chart of possibilities 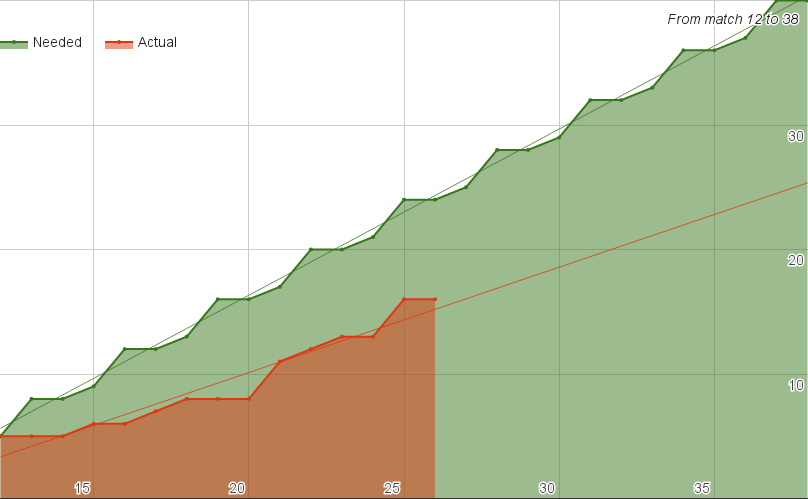