It isn't all bad and local ingredients come good 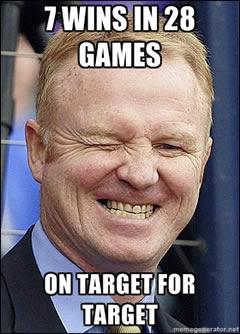 The real world is this: the players like McLeish because he is a likeable guy, but he can say stupid things. These stupid things are not going to annoy players, but they are going to annoy supporters. He is liked because it is a lot easier under McLeish than it was under Houllier. One is a winner, the other isn't.

He is also never going to be a successful top tier manager because his breed of football and thinking is dated. Admittedly, we did look like we were passing it more at the weekend, but Fulham are horrible travellers and only Wolves had a worse record away than Fulham before kick off - now they are even.

And for the win, we stay in fifteenth. That is the real world. This manager has done nothing this season that a trained monkey couldn't have done. In fact, the monkey might have got us more points and we wouldn't find ourselves sitting at the bottom of the third tier of the Premier League.

The real world is this: based on what is likely to happen with the five clubs at the bottom, we need four more points and as soon as we get them or actually, as soon as we are mathematically safe, this manager should be fired. He should be kicked out on his arse and sued. In the real world, he'd be arrested for fraud - impersonating a football manager.

But is isn't all bad

We finished the match with five players on the pitch from the Academy. This is what it should be about. Not about bringing in second rate players that don't care about the club.

We should be starting and finishing matches with seven or eight players from the Academy playing football the right way. But this isn't news - I've banged this drum for a long time and even longer than that.

My point is, you could play eleven kids from the Academy if the footballing philosophy was right and we had the right man managing them and we'd be better than fifteenth right now.

There you go. For a moment I had myself thinking there was a secret plan in action ... again. There isn't, but the next manager must buy into creating a footballing philosophy first, with the players he has. He just has to have a background in doing it and he must also clearly know what it is.

Sorry to put a downer on the start of your week but don't forget, we did win and it was fantastic to see Weimann score (he won the man of the match vote, pipping Stephen Ireland) but it is just one in four and we are still fifteenth.

Bolton up next and the one in four starts again, so this could be anything - care to make a prediction?