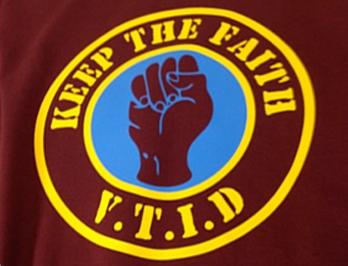 Right - sorry about the error yesterday. I purchased a new server recently and I'm in the process of moving everything from this server to the new one. Long story very short is I did something I shouldn't have a couple of years ago to make the server think it had something and it didn't - I forgot I did that. Then the shit hit the fan.

And that's that. But stuff has been happening this week. First, my new site at The BP Way will be live next week - it's where I'm going to try and find some love in football again. The first few posts are going to be quite interesting and my tickets are booked for the first home and first away game of the season.

But I'm going to stop mentioning that project very soon, because we're basically relegated and well, you don't want me writing about the new girl at the office. And it is a sad time, but like I wrote in the other post - it doesn't bother me that were going down - it's not the end of the world.

But I do want to endorse something I saw on Twitter - the relegation party. When it's confirmed, don't sit there with your head in your hands crying, celebrate it and have some fun. Sure, it's not nice, but you've got plenty of time to get used to it. We don't want those clowns taking screenshots.

New badge: Is this true?

And I'm not sure how true this is but did I read something about a new badge? I hope I did. The comedy lion was shocking. The star, confirmation we never really had aspirations of going for another. These things are surely going?

Why no star? The star can be worn above the badge when playing in the Champions League and that's when we should wear it. Not in the Premier League because then we start to align ourselves with teams like Manchester City who have not won it three times. The star is for Europe. Not the Premier League. Get it right this time.

But is this true or was this an April fool going round?

And in news that really shouldn't surprise you; Eric Black is giving out jobs to old mates. Now, you've got to be fairly optimistic to think we can save this season. Many would say I've been fairly optimistic this season, but not even I think there is a chance. So why are the club giving Black money to bring in old mates in coaching roles? Are there not enough people at the club to help him collect the cones?

Don't get me wrong, I think it's nice that he's the manager for a while - but aren't we just throwing money away? I'll tell you what; if Black keeps us up I'll tattoo his face to my back and I'll change my name to "Eric Eric Eric, oi oi oi".

Lastly today and I do mean that: Gabby

Let me be clear about Gabby. I like him. He's a local lad that's done well for himself and he's had my dream job. But I've never rated him as a footballer and I've got a lot of stick for that in the past. You know this. But at least I form an opinion and stick with it. That it turns out to be right most of the time, is just luck I guess.

But he has to go doesn't he and isn't this why he got caught with prostitutes and smoking. I mean, do we think he hasn't paid for sex before or smoked before. It's almost as if he wanted to get caught. Maybe he has a relegation clause in his contract and he wants out before he has to take a pay cut. Honestly, it's one of the reasons why I have no connection to the Premier League or Aston Villa anymore.

And I'm going to write it; I think Gabby is bad for Aston Villa. Sure we've had managers come and go and even a fair amount of players. But Gabby has been around for all of them. 72 league goals in 11 seasons. We could have done so much better.

Anyway, Gabby is back in the fold. He will have a good game or two because he's in the shop window looking for that last big contract. I say we drop him and let him rot, but thats just me and I'm not bitter.